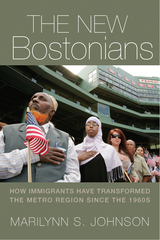 Among the most consequential pieces of Great Society legislation, the Immigration Act of 1965 opened the nation's doors to large-scale immigration from Africa, Asia, and Latin America. A half century later, the impact of the "new immigration" is evident in the transformation of the country's demographics, economy, politics, and culture, particularly in urban America.

In The New Bostonians, Marilynn S. Johnson examines the historical confluence of recent immigration and urban transformation in greater Boston, a region that underwent dramatic decline after World War II. Since the 1980s, the Boston area has experienced an astounding renaissance—a development, she argues, to which immigrants have contributed in numerous ways. From 1970 to 2010, the percentage of foreign-born residents of the city more than doubled, representing far more diversity than earlier waves of immigration. Like the older Irish, Italian, and other European immigrant groups whose labor once powered the region's industrial economy, these newer migrants have been crucial in re-building the population, labor force, and metropolitan landscape of the New Boston, although the fruits of the new prosperity have not been equally shared.
AUTHOR BIOGRAPHY
Marilynn S. Johnson is professor of history at Boston College. She is author of numerous books, including Street Justice: A History of Police Violence in New York City. Please see Johnson's website at http://www.thenewbostonians.com/
REVIEWS
-- Paul Watanabe, University of Massachusetts Boston


-- David Reimers, author of Unwelcome Strangers: American Identity and the Turn against Immigration