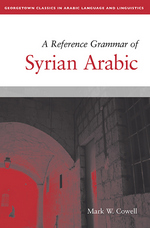 This important reissue, enhanced with free downloadable MP3 files to supplement the first chapter of the text (sounds), is another addition to Georgetown's world-renowned Arabic language-learning materials and is considered to be one of the most outstanding descriptions of any Arabic dialect written for the English-speaking world. It is comprehensive in its coverage—ranging from phonology (how sounds are organized and used) to morphology (sound, syllable, and word structure), with an analysis that is insightful and original. It contains hints on how to master nuances in dialectical pronunciation, as well as the differences of meaning in their various forms.

Based on the dialect of Damascus, the language covered here is part of what has variously been called "Syrian Arabic," "Eastern Arabic," and "Levantine Arabic," encompassing the dialects of Beirut, Amman, and Jerusalem—as well as Damascus—with references made to regional variants. In a world drawn ever closer to events in the Middle East, this comprehensive grammar reference is yet another extraordinary addition to the growing library of Arabic language-learning materials published by Georgetown University Press.

Accompanying MP3 files are available for download from the book’s webpage at press.georgetown.edu.