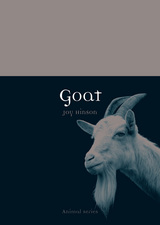 From “Three Billy Goats Gruff” to The Men Who Stare at Goats, this inimitable ruminant has long played a role in our literature and popular culture. And yet, our relationship with the “poor man’s cow” is oddly ambivalent. In the beautifully illustrated Goat, Joy Hinson explores the reason behind this unease while presenting readers with the animal’s fascinating natural history and its effect on myth, medicine, and culture.

Hinson traces the history of goats from their evolution millions of years ago through their domestication and role in the modern world. She delves into our interaction with endangered wild goat species and the familiar farmyard goat, and she reveals the harm done by humans in indiscriminately importing tamed goats, leading to huge feral populations in Australia and on the Galapagos Islands. Hinson also considers the place of goat products in culinary and medical traditions, from the pouring of goat urine into the ear as a cure for neck pain to the belief that a goat’s bezoar stone can be used as an antidote for poison. From Goat Festivals in the United States to the Christmas Goat in Sweden, Goat takes readers on an exciting ride through this frequently neglected animal’s history, life, and role in today’s world.
AUTHOR BIOGRAPHY
Joy Hinson is professor of postgraduate education and academic director of the Centre for Academic and Professional Development at Queen Mary University of London, UK. She is the author of The Adrenal Cortex and The Endocrine System.
TABLE OF CONTENTS


Introduction
1. A Natural History of the Goat
2. The Domesticated Goat
3. The Feral Goat
4. The Goat of Myth and Folklore
5. The Medicinal Goat
6. The Twenty-first-century Goat
Timeline
References
Select Bibliography
Associations and Websites
Acknowledgements
Photo Acknowledgements
Index