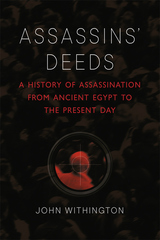 BUY FROM
Assassins’ Deeds: A History of Assassination from Ancient Egypt to the Present Day
by John Withington
Reaktion Books, 2020
Cloth: 978-1-78914-351-5
eISBN: 978-1-78914-352-2
Assassins have been killing the powerful and famous for at least three thousand years. Personal ambition, revenge, and anger have encouraged many to violent deeds, like the Turkish sultan who had nineteen of his brothers strangled or the bodyguards who murdered a dozen Roman emperors. More recently have come new motives like religious and political fanaticism, revolution and liberation, with governments also getting in on the act, while many victims seem to have been surprisingly careless: Abraham Lincoln was killed after letting his bodyguard go for a drink. So, do assassinations work? Drawing on anecdote, historical evidence, and statistical analysis, Assassins’ Deeds delves into some of history’s most notorious acts, unveiling an intriguing cast of characters, ingenious methods of killing, and many unintended consequences.
AUTHOR BIOGRAPHY
John Withington is an award-winning television journalist, based in London, whose previous books include Secrets of the Centenarians, also published by Reaktion Books.
REVIEWS
"Like Shakespeare himself, Assassins’ Deeds offers us a stage memorably strewn with the most distinguished of corpses. ‘Bloody instructions’ (as Macbeth called them) are certainly to be found here in abundance. But there are also wise words about how often incompetence and unintended consequences derail the best laid plans. Assassination, Withington instructs us in entertaining style, is no exact science. A messy tale: and a haunting one."
— Tim Wilson, director, Centre for the Study of Terrorism and Political Violence (CSTPV), University of St Andrews

TABLE OF CONTENTS
Cover
Title Page
Copyright Page
Contents
Prologue
1. The Ancient World
2. The Roman Empire and the Dark Ages
3. The Age of Chivalry
4. The Wars of Religion
5. The Age of Revolution
6. The Modern Age: World Wars and Terrorism
7. The Ones That Got Away
Select Bibliography
Photo Acknowledgements
Index