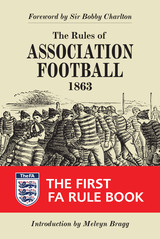 In 1863 a group of Victorian Oxbridge graduates, frustrated by the confusing riot of competing rules that characterized the game of  British football, began meeting at the Freemason’s Tavern in Lincoln’s Inn Fields, London, to codify the rules of the game. They quickly drew up the standard set of rules, creating the First Rule Book of the Football Association, reprinted here in its entirety alongside illustrations and drawings of the game.