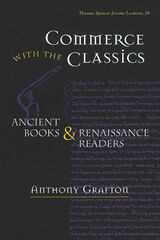 The style of reading in Renaissance Europe, as seen in the margins of books and in the texts of Renaissance intellectuals themselves, is deftly charted in this welcome volume from Anthony Grafton. Growing out of the Thomas Spencer Jerome Lectures that Anthony Grafton gave at the University of Michigan in 1992, this book describes the interaction between books and readers in the Renaissance, as seen in four major case studies.
Humanists Alberti, Pico, Budé, and Kepler, all major figures of their time and now major figures in intellectual history, are examined in the light of their distinctive ways of reading. Investigating a period of two centuries, Grafton vividly portrays the ways in which book/scholar interactions--and the established traditions that were reflected in these interactions--were part of and helped shape the subjects' Humanistic philosophy. The book also indicates how these traditions have implications for the modern literary scene.
Commerce with the Classics: Ancient Books and Renaissance Readers illustrates the immense variety of the humanist readers of the Renaissance. Grafton describes life in the Renaissance library, how the act of reading was shaped by the physical environment, and various styles of reading during the time. A strong sense of what skilled reading was like in the past is built up through anecdotes, philological analysis, and documents from a wide variety of sources, many of them unpublished.
This volume will be of special interest to Renaissance and intellectual historians, students of Renaissance literature, and classicists who concern themselves with the afterlife of their texts.
Anthony Grafton is Henry Putnam University Professor of History, Princeton University.
AUTHOR BIOGRAPHY
Anthony Grafton is Henry Putnam University Professor of History, Princeton University.
TABLE OF CONTENTS
Preface
Contents
Introduction: From Confucius to Cicero
1. Commerce with the Classics
2. Leon Battista Alberti: The Writer as Reader
3. Giovanni Pico della Mirandola: Trials and Triumphs of an Omnivore
4. How Guillaume Bude Read His Homer
5. Johannes Kepler: The New Astronomer Reads Ancient Texts
Epilogue
A Note on Further Reading
Index
Plates
REQUEST ACCESSIBLE FILE