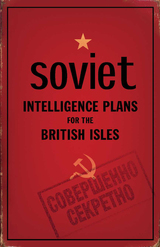 Soviet Intelligence Plans for the British Isles
by John Davies and Alexander J. Kent
foreword by The Embassy of the Russian Federation
Bodleian Library Publishing
Cloth: 978-1-85124-379-2
During the Cold War, the Soviet military embarked on a massive project to map every corner of the globe. As part of this project, many cities and towns in the British Isles were mapped in astonishing detail and with great accuracy, providing the Soviet Union with strategic intelligence on key British and Irish locations. These were not simply copies of existing local maps, but included considerable original research. Following the collapse of the Soviet Union, news of the previously secret maps began to emerge, though little is still known about why they were made or how the information was gathered.

Drawing on an archive acquired by the Bodleian Library, John M. Davies and Alexander J. Kent examine the maps of more than thirty British and Irish towns, including, among many others, Liverpool, Manchester, Birmingham, Swansea, and Sheffield. They look at some of the notable inaccuracies and highlight the surprising wealth of information the maps contain, including bridge heights, river depths, street names, and every strategic installation of possible significance. In addition, their expert commentary offers suggestions about what the maps may reveal about the sources of the data.

A fascinating collection of documents concerning Cold War military intelligence, Soviet Intelligence Plans for the British Isles represents an intriguing exploration of how information was compiled during a period of deep mutual suspicion between the Soviet Union and the West.
AUTHOR BIOGRAPHY
John M. Davies is the current editor of Sheetlines, the journal of the Charles Close Society for the Study of Ordnance Survey Maps. Alexander J. Kent is a senior lecturer in geography and geographic information systems in the Department of Geographical and Life Sciences at Canterbury Christ Church University in the UK.
REVIEWS

"This is a book that many of us have been wanting for years. What did Uncle Joe think that your town looked like? You might find the answer here—and it might not be the one either he or you were expecting!"