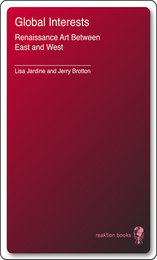 Looking outward for confirmation of who they were and what defined them as "civilized," Europeans encountered the returning gaze of what we now call the East, in particular the attention of the powerful Ottoman Empire. Global Interests explores the historical interactions that arose from these encounters as it considers three less-examined art objects—portrait medals, tapestries, and equestrian art—from a fresh and stimulating perspective. As portable artifacts, these objects are particularly potent tools for exploring the cultural currents flowing between the Orient and Occident.

Global Interests offers a timely reconsideration of the development of European imperialism, focusing on the Habsburg Empire of Charles V. Lisa Jardine and Jerry Brotton analyze the impact this history continues to have on contemporary perceptions of European culture and ethnic identity. They also investigate the ways in which European culture came to define itself culturally and aesthetically during the century-long span of 1450 to 1550. Ultimately, their study offers a radical and wide-ranging reassessment of Renaissance art.
AUTHOR BIOGRAPHY
Lisa Jardine is director of the AHRB Research Centre for Editing Lives and Letters and professor of Renaissance Studies at Queen Mary, University of London. She is the author of many books, including On a Grander Scale: The Outstanding Life and Tumultuous Times of Sir Christopher Wren. Jerry Brotton is a lecturer in Renaissance Studies at Queen Mary, University of London. He is the author of Trading Territories: Mapping the Early Modern World, published by Reaktion Books.
REVIEWS
This fascinating book provided me with a whole new way of thinking about the European Renaissance . . . While offereing a series of elegant interpretations of art objects exchanged between East and West... this is also an epic story of imperial rivalry exploring the ways in which courts jostled for supremacy through their display of magnificent art objects, many of which are beautifully reproduced here'
– The Good Book Guide 'Books of the Year'

'Cultural history needs the wider perspective [the authors] enjoin, and, as their reflections suggest, it is a mistake to think one can satisfactorily explain anything about the European continent - its art, the growth of it science, its social, political or religious history - in ignorance of its close relations with its eastern and southern margins. Global Interests is a valuable corrective to the established tendency to disregard them' – Literary Review

'impressive . . . the discussion is full of remarkable examples . . . there is much that will stimulate thought and excite admiration' – Art Quarterly