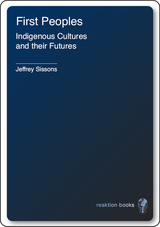 It is widely assumed that indigenous cultures are under threat: they are rooted in landscapes that have undergone radical transformations, and the opposing forces of business corporations and ruling political powers only seem to grow stronger. Yet Jeff Sissons argues here in First Peoples that, far from collapsing in the face of global capitalism, indigenous cultures today are as diverse and alive as they ever were.

First Peoples explores how, instead of being absorbed into a homogeneous modernity, indigenous cultures are actively shaping alternative futures for themselves and appropriating global resources for their own culturally specific needs. From the Inuit and Saami in the north to the Maori and Aboriginal Australians in the south to the American Indians in the west, Sissons shows that for indigenous peoples, culture is more than simply heritage-it is a continuous project of preservation and revival.

Sissons argues that the cultural renaissances that occurred among indigenous peoples during the late twentieth century were not simply one-time occurrences; instead, they are crucial events that affirmed their cultures and re-established them as viable political entities posing unique challenges to states and their bureaucracies. He explores how indigenous peoples have also defined their identities through forged alliances such as the World Council of Indigenous Peoples and how these allied communities have created an alternative political order to the global organization of states.

First Peoples is a groundbreaking volume that vigorously contends that indigenous peoples have begun a new movement to solve the economic and political issues facing their communities, and they are doing so in unique and innovative ways.
AUTHOR BIOGRAPHY
Jeffrey Sissons is professor of social anthropology at the School of Global Studies at Massey University in New Zealand.
REVIEWS

"For Sissons, modernization does not necessarily entail cultural loss. . . . Perhaps cultural change instead mere 'relocation of indigeneity' on a geographical and a metaphorical level."