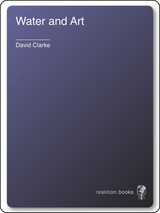 Restless, protean, fluid, evanescent—despite being a challenge to represent visually, water has gained a striking significance in the art of the twentieth century. This may be due to the fact that it allows for a range of metaphorical meanings, many of which are particularly appropriate to the modern age. Water is not merely a subject of contemporary art, but also a material increasingly used in art-making, giving it a distinct dual presence.

Water and Art probes the ways in which water has gained an unprecedented prominence in modern Western art and seeks to draw connections to its depiction in earlier art forms. David Clarke looks across cultures, finding parallels within contemporary Chinese art, which draws on a cultural tradition in which water has an essential presence and is used as both a subject and a medium. The book features a wealth of images by artists from East and West, including Fu Baoshi, Shi Tao, Wei Zixi, Fang Rending, Leonardo da Vinci, Bernini, Turner, Gericault, Klee, Matisse, Monet, Picasso, Mondrian, and Kandinsky.

Fast-paced, accessible, and comprehensive, Water and Art will appeal to the specialist and the general reader alike, offering fresh perspectives on familiar artists as well as an introduction to others who are less well-known.

David Clarke is professor of fine arts at the University of Hong Kong.  He has written several books including Hong Kong  x 24 x 365: A Year in the Life of a City and Hong Kong Art: Culture and Decolonization, the latter also published by Reaktion Books.

REVIEWS
“Clarke offers an alternative reading to the traditional narrative of modern and contemporary art by arguing that water has played a profound role in European and Chinese art. . . .The ample illustrations and well-written prose support his argument that water's double presence—the author's terminology describing the signifier and signified of water—has allowed artists to foreground fluidity and dissolution, and in so doing to reference the unbounded, changing nature of art and the world. . . . An insightful new reading that will be of value to advanced students and scholars. . . . Highly recommended.”
— Choice

“Clarke’s focus is on modern and contemporary art, and he demonstrates that our fascination remains fully intact and took on new significance in the modern and post-modern era. From the seascapes of Turner to the geometric abstractions of Mondrian, water offered a provocative challenge to the modern artist.”
— Arlis

1 The Place of Water in European Art
2 Monet and the Surface of Water
3 Paths to Dissolution: Water and Abstract Art
4 Raining, Drowning and Swimming: Fu Baoshi and Water
5 The Watery Turn in Contemporary Chinese Art