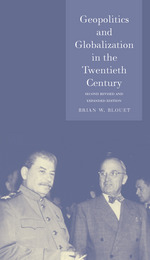 Geopolitics and Globalization in the Twentieth Century looks at the struggle between the processes of globalization and the forces of geopolitics over the last 150 years. The twentieth century witnessed conflicts between geopolitical states who wanted to close off and control land, resources, and population—like Nazi Germany and the former Soviet Union—and globalizing ones who wished to open up the world to the free flow of ideas, goods and services—like Britain and America. Geopolitics and Globalization describes and analyzes the tug-of-war between these two tendencies, the results of which have determined the shape and behavior of the world we live in today.

Beginning his survey in the late nineteenth century, Brian W. Blouet, in this revised and expanded second edition, brings his analysis up to the present day, when  communication technologies are no longer land- or sea-based, and thus render globalization nearly inevitable.

Brian W. Blouet is the Huby Professor of Geography and International Education at the College of William and Mary. He is also the author of Halford MacKinder: A Biography.

“Offers an impressive marshalling of geopolitical history”—Journal of World History, on the first edition

“Destined to influence this debate for years to come.”—History Today, on the first edition