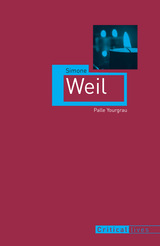 Simone Weil, legendary French philosopher, political activist, and mystic, died in 1943 at a sanatorium in Kent, England, at the age of thirty-four. During her brief lifetime, Weil was a paradox of asceticism and reclusive introversion who also maintained a teaching career and an active participation in politics.

In this concise biography, Palle Yourgrau outlines Weil’s influential life and work and demonstrates how she tried to apply philosophy to everyday life. Born in Paris to a cultivated Jewish-French family, Weil excelled at philosophy, and her empathetic political conscience channeled itself into political engagement and activism on behalf of the working class. Yourgrau assesses Weil’s controversial critique of Judaism as well as her radical re-imagination of Christianity—following a powerful religious experience in 1937—in light of Plato’s philosophy as a bridge between human suffering and divine perfection.

In Simone Weil, Yourgrau provides careful, concise readings of Weil’s work while exploring how Weil has come to be seen as both a modern saint and a bête noir, a Jew accused of having abandoned her own people in their hour of greatest need.

Palle Yourgrau is professor of philosophy at Brandeis University and the author of A World Without Time: The Forgotten Legacy of Gödel and Einstein.

REVIEWS
“Weil’s moral absolutism remains a reproach to Jews who believe they can appropriate Israel’s ethnicity (and perhaps its ethics) but dispense with its holiness code, and to Christians who seek redemption in their own ethnic roots rather than through adoption into the People of God. Al­though her reasoning led to tragic re­sults, Weil nonetheless did the world a service, and Yourgrau has done a service by explaining her.”
— First Things

“A comprehensive philosophical reading—to my mind, the first—of Weil’s work. . . . Yourgrau is a master at tracing the hyper-sanity within dense philosophical systems that appear, to the untrained, as madness. . . . Paying this great philosopher the compliment of discussing her work in its own terms, Yourgrau has, for the first time, given the breadth of Weil’s thought the expansive frame it deserves.”
— Los Angeles Review of Books

5. A Great Day for Indo-China

6. A Difference between France and God

8. On the Jewish Question