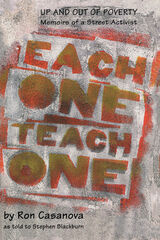 Each One Teach One: Up and Out of Poverty, Memoirs of a Street Activist
by Ron Casanova and Stephen Blackburn
Northwestern University Press, 2010
Cloth: 978-1-880684-37-5
Each One Teach One chronicles Ron Casanova's struggle out of poverty, homelessness, and drug addiction to find dignity and purpose in life. Through his own awakening, this Black, Puerto Rican activist ultimately finds his answer in helping other people. Born into a dysfunctional family and placed in an orphanage on Staten Island at an early age, Casanova faced overwhelming odds. His story illuminates some of the major events of our time, including the "police riot" at Tompkins Square, the "Housing Now" march of the homeless on Washington, and community takeovers of housing in Kansas City, New York, and Philadelphia.

Underlying Each One Teach One, with its vivid cast of characters and intimate descriptions of Harlem and other urban areas, is the profound sense that no matter what your circumstance, you can use your past experience to help others. Ultimately, Casanova's story is a message of hope for the future and for the possibility of self-sufficiency and self-empowerment for each individual.
AUTHOR BIOGRAPHY
Ron Casanova was an American activist. At different periods in his life, he was the Vice President of the National Union of the Homeless, the Editor of the Union of the Homeless National News, and the Director of The Kansas City Union of the Homeless. He also served as the founding director of Artists for a Better America in New York City and as a leader of the Poor Peoples Economic Human Rights Campaign. He died in 2011.

Stephen Blackburn is an American author. Born in Corpus Christi, Texas, he holds both a BA and an MFA from the University of Texas at Austin. He is the author of the memoir Each One Teach One (with activist Ron Casanova), the short story collection The Extinction of Rhinos in Mexico: 9 Tales of Life and Death, and a play, The Rock of Abandon, that was staged by the Fierce Backbone Theatre Company in Hollywood. He currently lives in Los Angeles with his wife, Consuelo.
TABLE OF CONTENTS


Rabbit Blood
Stray Dog
Living in the Notch
Ricochet Kid
Jitterbugging
Coxsackie
Matteawan
Playing in the Village
Fork in the Road
Comstock
Rise and Fall
New Chances, Old Patterns
A Bowl of Soup and a Prayer
Tent City
Up from the Wounded Streets
The New Exodus March
The ABCs of Politics
The Gun to Our Heads
A Dinkins Christmas
Takeover
The Kansas City Union of the Homeless
A Time to Reassess
Dilemma
America Street