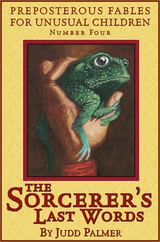 In the aftermath of the notorious event of the enchanted broom, the
Sorcerer’s Apprentice learns his lesson indeed: “Seek Truth, not Power,” is
the Sorcerer’s dictum. Peace returns to the castle’s long days, but as obedient
Humboldt grows older, a madness grows in his master. The sorcerer has
discovered strange secrets in the depths of the library. Humboldt’s dreams,
too, are haunted by the broom, and the gods of wood, water and straw
whisper through the halls at night.

One fateful day, they have a visitor: a king has come to demand the alchemical services of the Sorcerer. When the king is denied he responds without mercy,and the Sorcerer’s gentle philosophy perishes with him in the flames. Humboldt finds himself cast into the world alone, with nothing but his master’s book of spells, and a newly unshackled desire for forbidden power.

An unleashed Humboldt is a terrible thing to behold. He learns the secrets
of the book and uses it to avenge his master’s murder, and he does not stop
there: he usurps the throne itself. But he cannot escape the broom, which
clatters in the night as Humboldt grows more and more tyrannical. The
kingdom is aflame with bonfires of house-cleaning implements, and the
days grow darker, until the Broom is finally victorious, flooding the imperial
castle and sweeping Humboldt into the depths of the sea for his final
encounter with the Nether God. But is the Sorcerer really as dead as he
appears?

Author/illustrator Judd Palmer is one of the founders of The Old Trout Puppet Workshop, a puppet theatre company that tours internationally. He’s also a member of the Agnostic Mountain Gospel Choir, a clank-and-holler old-style blues band.

Twice shortlisted for the Governor-General’s Award for Children’s Literature, the Preposterous Fables series is a cult favourite amongst children and adults alike. Each book is a poetic, philosophical and preposterous take on a familiar fairy tale, twisted to suit the nefarious purposes of author and illustrator Judd Palmer.