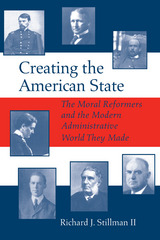 In this illuminating and provocative study, Stillman provides a new understanding of the foundation of the American state.

Whether renewing a driver's license, traveling on an airplane, or just watching in fascination as a robot probes Mars, we all participate in the everyday workings of the modern administrative state. As Stillman demonstrates in this study, however, we have not, until now, fully investigated or appreciated this administrative stateÕs origins or its evolution into the entity that so affects our lives today.

Stillman reveals that this modern enterprise emerged from a complex foundation of ideas and ideals rather than as a result of a simple, rational plan or cataclysmic event, as previously contended. In fact, he finds that the basis for our current administrative state lies in the lives of the seven individuals who, during the late 19th and early 20th centuries, invented its various elements.

Stillman also finds that although they lived at different times, these seven founders-George William Curtis, Charles Francis Adams, Jr., Emory Upton, Jane Addams, Frederick W. Taylor, Richard Childs, and Louis Brownlow-had much in common: all were products of intensely Protestant, small-town America, and all were motivated by strong moral idealism. Indeed, Stillman finds that state making in the United States has been a continuation of the Protestant goal to "protest and purify."

Some names are more recognizable than others, but all, through remarkable moral fervor and exceptional leadership skills, invented the administrative practices and procedures so familiar today.

Richard J. Stillman II is Professor of Public Administration at the University of Colorado at Denver.