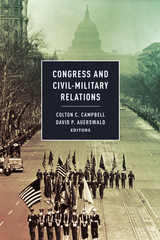 While the president is the commander in chief, the US Congress plays a critical and underappreciated role in civil-military relations—the relationship between the armed forces and the civilian leadership that commands it. This unique book edited by Colton C. Campbell and David P. Auerswald will help readers better understand the role of Congress in military affairs and national and international security policy. Contributors include the most experienced scholars in the field as well as practitioners and innovative new voices, all delving into the ways Congress attempts to direct the military.

This book explores four tools in particular that play a key role in congressional action: the selection of military officers, delegation of authority to the military, oversight of the military branches, and the establishment of incentives—both positive and negative—to encourage appropriate military behavior. The contributors explore the obstacles and pressures faced by legislators including the necessity of balancing national concerns and local interests, partisan and intraparty differences, budgetary constraints, the military's traditional resistance to change, and an ongoing lack of foreign policy consensus at the national level. Yet, despite the considerable barriers, Congress influences policy on everything from closing bases to drone warfare to acquisitions.

A groundbreaking study, Congress and Civil-Military Relations points the way forward in analyzing an overlooked yet fundamental government relationship.

Colton C. Campbell is a professor of national security strategy at the National War College, National Defense University. His books include the co-edited volume Congress and the Politics of National Security.

David P. Auerswald is a professor of strategy and policy at the National War College. His books include the coauthored NATO in Afghanistan: Fighting Together, Fighting Alone.