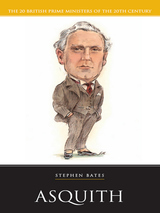 Asquith's administration laid the foundation of Britain's welfare state, but he was plunged into a major power struggle with the House of Lords. The budget of 1909 was vetoed by the hereditary upper chamber, and in 1910 Asquith called and won two elections on this constitutional issue. The Lords eventually passed the 1911 Parliament Act, ending their veto of financial legislation. Asquith was Prime Minister on the outbreak of World War I, but his government fell in 1916 as a result of the 'Shells Scandal'.
AUTHOR BIOGRAPHY
Stephen Bates is a senior correspondent for The Guardian where he now writes about religion and royalty and was formerly a political correspondent and the paper's European Affairs Editor. He has also been a journalist with the Daily Mail and Daily Telegraph.