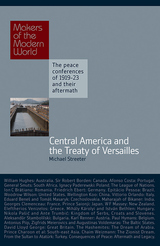 They were in the United States' backyard, and in some cases under her direct protection. So in many ways it was little surprise when Cuba, Haiti, Nicaragua, Guatemala, Panama and Honduras joined the war on the Allied side in 1917 and 1918. Their involvement in the war was minimal, indeed scarcely noticeable, but it was enough. It earned these small relatively powerless nations—in Haiti's case barely a functioning state—an invitation to sit alongside the Great Powers at the Paris Peace Conference of 1919 and sign the Treaty of Versailles.
AUTHOR BIOGRAPHY
Michael Streeter is a writer and journalist who worked for many years as a journalist, including spells as news editor of the Independent on Sunday and as editor of the Scottish Daily Express. He has written books on a variety of subjects ranging from the history of witchcraft to internet crime. He also wrote Life&Times: Franco (2005), South America and the Treaty of Versailles, published in the Makers of the Modern World series.
TABLE OF CONTENTS
Contents
Preface
I. The Lives and the Lands
1. Origins 1800–1900
2. The Age of Interventions 1900–1914
3. Follow My Leader 1914–1918
II. The Paris Peace Conference
4. Getting Heard 1918–1919
5. Unhappy in Paris 1919
III. The Legacy
6. Honduras and Guatemala
7. Panama and Nicaragua
8. Cuba and Haiti
Epilogue
Notes
Chronology
Further Reading
Picture Sources
Index