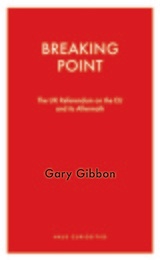 BUY FROM
Breaking Point: The UK Referendum on the EU and Its Aftermath
by Gary Gibbon
Haus Publishing, 2017
eISBN: 978-1-910376-67-6
Paper: 978-1-910376-62-1
As the aftermath of Brexit continues to unfold, people around the world are wondering just how Brexit happened, where post-referendum Britain is heading, and what lessons might be learned by the global community. Gary Gibbon, a preeminent political broadcaster who had extraordinary access to both sides of the campaign leading up to the referendum, explores all of these issues in Breaking Point.

Examining official and off-the-record meetings with both senior politicians and ordinary voters, Gibbon addresses tough questions that are troubling the entire European continent: Now that the United Kingdom has voted for Brexit, to what extent can it truly “leave” a set of relationships that extend to the country’s doorstep? And will the decision be a lethal blow to the European Union, perhaps spurring on copycat secession movements?
AUTHOR BIOGRAPHY
Gary Gibbon is the political editor for Channel 4 News.
REVIEWS
"[An] informative mixture of diary and analysis that starkly lays out the shortcomings of the Remain campaign—its multiple failures to connect with ordinary voters, find an answer to the immigration question and counter the personalities of the vote Leave side.”
— Financial Times