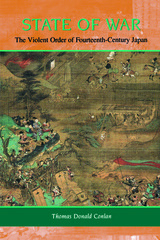 State of War, a path-breaking study of the transformative power of war and its profound influence on fourteenth-century Japan, presents a fundamental revision of Japanese history. By illuminating Japan through the lens of war, Thomas Conlan provides insight into how state and society functioned, as opposed to how they were portrayed in ideal. Conlan recreates the experience of war from the perspective of one warrior, and then reconstructs how war was fought through statistical analysis of surviving casualty records.

State of War also shows that the battles of the fourteenth century mark a watershed in Japanese history. The fiscal exigencies of waging war led to a devolution of political power to the provinces. Furthermore, the outbreak of war caused social status to become performative, based upon the ability to fight autonomously, rather than being prescriptive, or determined by edicts of investiture. This work bridges the intellectual gulf between the fourteenth and twentieth centuries by exploring how the seemingly contradictory categories of "religion" and "war" were integrally related. The fourteenth-century belief that the outcome of battle was determined by the gods meant that religious institutions warred both ritually and physically, and that religious attitudes frequently underpinned warrior behavior.