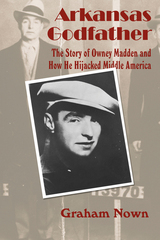 Owney Madden lived a seemingly quiet life for decades in the resort town of Hot Springs, Arkansas, while he was actually helping some of America's most notorious gangsters rule a vast criminal empire. In 1987, Graham Nown first told Madden's story in his book The English Godfather, in which he traced Madden's boyhood in England, his immigration to New York City, and his rise to mob boss. Nown also uncovered a love story involving Madden and the daughter of the Hot Springs postmaster. Before his arrival in Hot Springs, Madden was one of the most powerful gangsters in New York City and former owner of the famous Cotton Club in Harlem. The story of his life shows us a world where people can break the law without ever getting caught, and where criminality is so entwined in government and society that one might wonder what is legality and what isn't.
AUTHOR BIOGRAPHY
Graham Nown was a journalist and broadcaster who lived in the United Kingdom. He spent four years during the 1980s researching the life of Owney Madden.
TABLE OF CONTENTS
Contents
Introduction
1. Duke of the West Side
2. Huddled Masses
3. Fire in the Streets
4. Enemies
5. The Big Thirst
6. The Great White Way
7. Phoenix Rising
8. Fighting Chance
9. Birth of the Businessman-Gangster
10. The Mad Dog
11. The Postmaster’s Daughter
12. Trouble in Mind
13. Enter the G-Men
14. Symphony in Blue
15. Bubbles
16. The Quiet American
17. When the Bubble Burst
Acknowledgments
Bibliography
Index
About the Author
REQUEST ACCESSIBLE FILE