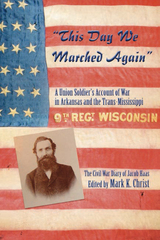 A testament to the valor and determination of a common soldier On September 17, 1861, twenty-two-year-old Jacob Haas enlisted in the Sheboygan Tigers, a company of German immigrants that became Company A of the Ninth Wisconsin Infantry Regiment. Over the next three years, Haas and his comrades marched thousands of miles and saw service in Arkansas, Kansas, Missouri, and the Indian Territory, including pitched battles at Newtonia, Missouri, and Jenkins’ Ferry, Arkansas. Haas describes the war from the perspective of a private soldier and an immigrant as he marches through scorching summers and brutally cold winters to fight in some of the most savage combat in the west. His diary shows us an extraordinary story of the valor and determination of a volunteer soldier. Though his health was ruined by war, Haas voiced no regrets for the price he paid to fight for his adopted country.
AUTHOR BIOGRAPHY
Mark K. Christ is outreach director for the Arkansas Historic Preservation Program at the Department of Arkansas Heritage and has led the agency's battlefield preservation efforts since 1992. Christ is the author or editor of numerous books on Arkansas Civil War history, including The Die Is Cast: Arkansas Goes to War, 1861; Rugged and Sublime: The Civil War in Arkansas; and “All Cut to Pieces and Gone to Hell”: The Civil War, Race Relations, and the Battle of Poison Spring. A graduate of the University of Arkansas at Little Rock with a master’s degree from the University of Oklahoma, Christ lives in Little Rock with his wife, Kimberly, and their daughters, Emily and Cassandra.
TABLE OF CONTENTS
Contents
Acknowledgements
Introduction
Diary of Jacob Haas As Soldier in the Civil War
Photographs and Maps
Bibliography
Index
About the Editor
REQUEST ACCESSIBLE FILE