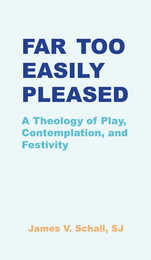 Far Too Easily Pleased: A Theology of Play, Contemplation, and Festivity
by James V., SJ Schall
Catholic University of America Press, 2020
eISBN: 978-1-949822-07-6
Paper: 978-1-949822-06-9
Far Too Easily Pleased was originally published in 1976, although it is just as relevant today. Catholic Education Press is thrilled to be able to bring this book back into print. To summarize the volume we can do better than to excerpt part of Fr. Schall’s introduction to the 1976 edition:

This book is intended to be a helpful stimulus to incite the reader to survey the truly exciting literature in this field and to assist in organizing personal reflection about the basic themes of game, play, wonder, rite, contemplation and festivity, themes that the theology of play naturally suggests. For it can be truly said that those who have not yet been initiated into this style of religious and cultural thought have been missing highly liberating and ennobling levels of our heritage. For those who already know what rewards are to be found in play and game, it is hoped that this book can again be a fresh and different approach to wonder and fascination, to the curiously marvelous life we have been given.

James V. Schall, SJ, (1928-2019) was an American Jesuit Roman Catholic priest, teacher, writer, and philosopher. He retired in 2012 after a long tenure as a professor of political philosophy at Georgetown University Among his many books are The Universe We Think In; Political Philosophy and Revelation: A Catholic Reading; The Mind That Is Catholic: Philosophical and Political Essays; Schall on Chesterton: Timely Essays on Timeless Paradoxes and At the Limits of Political Philosophy: From “Brilliant Errors” To Things of Uncommon Importance (all CUA Press).
TABLE OF CONTENTS
Contents
Introduction
1. People Who Do Not Play
2. The Kinds of Games There Are
3. Outside of Nothingness on the Fields of Play
4. Playing Again - Redemption
5. The Action and the Player
6. Ultimately Beholders
7. Worship
8. Festivity
Conclusion
Bibliography