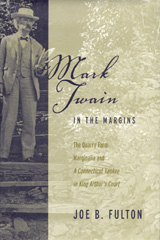 The common characterization of Mark Twain as an uneducated and improvisational writer took hold largely because of the novelist's own frequent claims about his writing practices. But using recently discovered evidence--Twain's marginal notes in books he consulted as he worked on A Connecticut Yankee in King Arthur's Court--Joe Fulton argues for a reconsideration of scholarly views about Twain's writing process, showing that this great American author crafted his novels with careful research and calculated design.

Fulton analyzes Twain's voluminous marginalia in the copies of Macaulay's History of England, Carlyle's History of the French Revolution, and Lecky's History of the Rise of Rationalism and England in the Eighteenth Century available to Twain in the library of Quarry Farm, the New York farm where the novelist and his family routinely spent their summers. Comparing these marginal notes to entries in Twain's writing journal, the manuscript of Connecticut Yankee, and the book as published in 1889, Fulton establishes that Twain's research decisively influenced the novel. Fulton reveals Twain to be both the writer from experience he claimed to be and the careful craftsman that he attempted to downplay. By redefining Twain's aesthetic, Fulton reinvigorates current debates about what constitutes literary realism.

Fulton's transcriptions of the marginalia appear in an appendix; together with his analysis, they provide a valuable new resource for Twain scholars.

Joe B. Fulton is Assistant Professor of English at Dalton College in Georgia.