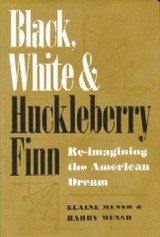 This consequential book takes a hard, systematic look at the depiction of blacks, whites, and race relations in Mark Twain's classic novel, raising questions about its canonical status in American literature.


Huckleberry Finn, one of the most widely taught novels in American literature, has long been the subject of ongoing debates over issues ranging from immorality to racism. Here, Elaine Mensh and Harry Mensh enter the debate with a careful and thoughtful examination of racial messages imbedded in the tale of Huck and Jim.

Using as a gauge for analysis the historical record left by both slaves and slaveholders, the Menshes compare Twain's depiction with historical reality, attempting to determine where the book either undermines or upholds traditional racial attitudes. Surveying the opinions of fellow critics, they challenge the current consensus that Huckleberry Finn fosters rapport between blacks and whites, arguing that the book does not subvert ingrained beliefs about race, and demonstrating that the argument over black-white relations in the novel is also an argument over non-fictional racial relations and conflicting perceptions of racial harmony.


Reading the novel in its historical context, the Menshes conclude that Twain, in the character of Huck, never questions the institution of slavery, and even supports it in both thought and action. In response to student and parent challenges to the inclusion of the book in literature classes, they suggest that it should remain in school libraries but not be required reading.


Of importance to scholars of Mark Twain and American literature, African American cultural studies, or anyone interested in issues of literature and race, this book adds a strong voice to the long-ranging debate over Huckleberry Finn.

Elaine and Harry Mensh are independent writers in New York City. They are the authors of The IQ Mythology: Class, Race, Gender, and Inequality and winners of the Anisfield-Wolf Book Award for books on race and diversity.

REVIEWS
"This is an important book, because it both neatly summarizes the controversy [regarding Huckleberry Finn's canonical status] and powerfully intervenes in it. In addition, it also discloses how this argument over fictional black-white relations has also been, and remains, an argument over real ones."
—Times Literary Supplement
— -