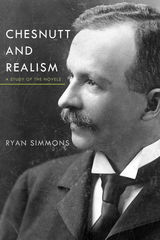 Although Chesnutt is typically acknowledged as the most prominent African American writer of the realist period, scholars have paid little attention to the central question of this study: what does it mean to call Chesnutt a realist? As a writer whose career was restricted by the dismal racial politics of his era, Chesnutt refused to conform to literary conventions for depicting race. Nor did he use his imaginative skills to evade the realities he and other African Americans faced. Rather, he experimented with ways of portraying reality that could elicit an appropriate, proportionate response to it, as Ryan Simmons demonstrates in extended readings of each of Chesnutt’s novels, including important unpublished works overlooked by previous critics.

In addition, Chesnutt and Realism addresses a curiously neglected subject in American literary studies—the relationship between American literary realism and race. By taking Chesnutt seriously as a contributor to realism, this book articulates the strategies by which one African American intellectual helped to de?ne the discourses that in?uenced his fate.
AUTHOR BIOGRAPHY
Ryan Simmons is an instructor at Spokane Falls Community College, where he teaches courses including English, African American literature, and multicultural literature.
REVIEWS

"Readers will doubtless view the liberation of Chesnutt from a narrow definition of literary realism as this book's most obvious contribution to our understanding of this major American writer. Simmons's close readings of the novels repeatedly reveal the complexity of their characterizations and themes. This study will be appreciated by those interested not only in Chesnutt's personality and art but also in race relations in the U.S. from the 1870s through the 1920s, the emergence of a sophisticated African-American literary tradition at the beginning of the 20th century, and the historical relationship between the prose romance and novel genres in American literature."—Joseph R. McElrath, editor of Charles W. Chesnutt: Essays and Speeches

Introduction: Of Race and Realism

1. Learning to Be a Realist: Chesnutt’s Northern Novels

3. Simple and Complex Discourse in The Marrow of Tradition

5. “The Category of Surreptitious Things”: Paul Marchand, F.M.C. and The Quarry