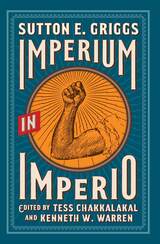 A new critical edition of Sutton Griggs’s turn-of-the-twentieth-century novel, which continues to shed light on understandings of Black politics.

Sutton E. Griggs’s first novel, originally published in 1899, paints a searing picture of the violent enforcement of disfranchisement and Jim Crow racial segregation. Based on events of the time, including US imperial policies, revolutionary movements, and racial protests, Imperium in Imperio introduces the fictional Belton Piedmont and Bernard Belgrave as “future leaders of their race” and uses these characters to make sense of the violence that marked the dawn of the twentieth century. Taking on contemporary battles over separatism and integration, Griggs’s novel continues to play a crucial role in understandings of Black politics.

Edited and introduced by Tess Chakkalakal and Kenneth W. Warren, this new critical edition offers not only an incisive biographical and historical introduction to the novel and its author but also a wealth of references that make the events and characters of Griggs’s Imperium in Imperio, and its aftermath, accessible to readers today.

AUTHOR BIOGRAPHY
Tess Chakkalakal is associate professor of Africana studies and English at Bowdoin College and the author of Novel Bondage: Slavery, Marriage, and Freedom in Nineteenth-Century America.

Kenneth W. Warren is Fairfax M. Cone Distinguished Service Professor in English at the University of Chicago and the author of What Was African American Literature?

REVIEWS
“An excellent edition that will make this important work more accessible to scholars and students alike.”
Benjamin Fagan, author of The Black Newspaper and the Chosen Nation

Appendix A: The Lynching of Postmaster Frazier B. Baker

Appendix B: The Story of My Struggles (1914) by Sutton E. Griggs