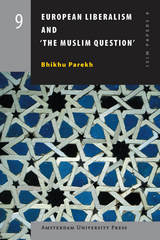 BUY
European Liberalism and 'the Muslim Question'
by Bhikhu Parekh
Amsterdam University Press, 2008
eISBN: 978-90-485-0108-3
Paper: 978-90-5356-087-7
A large section of European opinion believes that Muslims present a long term political and cultural threat. Professor Parekh argues that this view is deeply mistaken. There is, nevertheless, a small underclass, mainly young, which is deeply alienated from both their parental and European cultures. They are in Europe but not of it, and have no commitment to it. A dialogue between the Muslim communities in general and the host societies is therefore necessary. It has its limits and weshould not expect too much from it. However, there is no alternative to it.
AUTHOR BIOGRAPHY
Bhikhu Parekh is Professor of Political Philosophy at the University of Westminster, United Kingdom