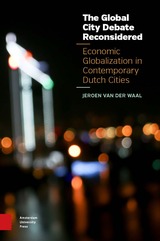 The idea of the "global city," which focuses on globalisation's impact on the social, financial, and political reality of cities in advanced economies, has become widely influential in the decades since its introduction-and yet the major issues in the "global city debate" remain unresolved. This book provides a systematic overview of the debate and competing theoretical notions, as well as an argument for the need to test the framework's empirical validity before the unresolved questions can be fruitfully addressed. By testing data from the Netherlands in the 1990s and 2000s, the author demonstrates the value of rigorous empirical scrutiny while offering fresh insights for the global city debate as a whole.
AUTHOR BIOGRAPHY
Political and urban sociologist Jeroen van der Waal is Associate Professor of Sociology at Erasmus University Rotterdam. He primarily investigates the impact of globalisation on inequality, value orientations and voting behaviour in the west. For details, see: www.jeroenvanderwaal.com
TABLE OF CONTENTS