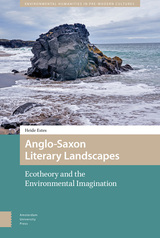 Literary scholars have traditionally understood landscapes, whether natural or manmade, as metaphors for humanity instead of concrete settings for people's actions. This book accepts the natural world as such by investigating how Anglo-Saxons interacted with and conceived of their lived environments. Examining Old English poems, such as Beowulf and Judith, as well as descriptions of natural events from the Anglo-Saxon Chronicle and other documentary texts, Heide Estes shows that Anglo-Saxon ideologies which view nature as diametrically opposed to humans, and the natural world as designed for human use, have become deeply embedded in our cultural heritage, language, and more.
AUTHOR BIOGRAPHY
Heide Estes is Professor of English at Monmouth University. She has published Old and Middle English language and literature, focusing on sexuality and gender, the reception of Jews, and disability. She is editor with Haruko Momma of Old English Across the Curriculum: Contexts and Pedagogies, a special issue of Studies in Medieval and Renaissance Teaching forthcoming in 2016. She is founder of the scholarly group Medieval Ecocriticisms.
TABLE OF CONTENTS


1: Introduction2: Imagining the Sea in Secular and Religious Poetry3: Ruined Landscapes4: Rewriting Guthlac's Wilderness5: Animal Natures6: Objects and Hyperobjects7: Conclusion: Ecologies of the Past and the Future