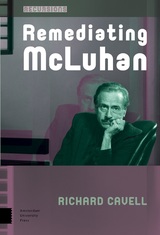 While current scholarly interest has assured McLuhan's foundational status as media theorist, it has by no means exhausted the import of his writings, which take on additional layers in the current digital moment. This collection of essays argues that it was McLuhan's confrontation of the bios that was the distinguishing feature of his media theory and the source of its most consistent problematic. Holding that media were extensions of the human, McLuhan also posited that the human was a product of technology. Remediating McLuhan ranges over media theory, art history, bio-technology and deep history in addressing this problematic, and discusses McLuhan in the context of Flusser and Turing, Carl Woese and Daniel Lord Smail.
AUTHOR BIOGRAPHY
Richard Cavell is Professor of English and co-founder of the Bachelor in Media Studies Program at the University of British Columbia. He is the author of McLuhan in Space: A Cultural Geography (2002), the curator of the website spectresofmcluhan.arts.ubc.ca, and author of the critical performance piece Marinetti Dines with the High Command (2014).
REVIEWS
"an insightful volume. . .The essays, arranged in an acoustic rather than visual pattern, engage developments of and responses to McLuhan’s ideas. Recommended.”
— Choice


Introduction and Acknowledgements; List of SiglaI Re: Mediation1 Beyond McLuhanism2 McLuhan and the Question of the Book Embodiment as Incorporation 3 McLuhan and the Body as Medium 4 McLuhan, Tactility, and the Digital 5 Mechanical Brides and Vampire Squids Empathic Media 6 McLuhan: Motion: e-Motion 7 Remediating the Medium Determining Technology 8 McLuhan, Turing, and the Question of Determinism 9 Angels and Robots Being Mediated 10 Marshall McLuhan's Echo-Criticism 11 McLuhan and the Technology of BeingII 12 The Tragedy of Media: Nietzsche, McLuhan, KittlerCoda On the 50th Anniversary of Understanding Media Works Cited and Index