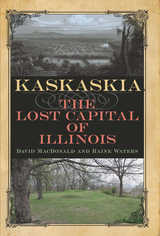 Kaskaskia
The Lost Capital of Illinois
David MacDonald and Raine Waters
Southern Illinois University Press, 2019
This first comprehensive account of the Illinois village of Kaskaskia covers more than two hundred years in the vast and compelling history of the state. David MacDonald and Raine Waters explore Illinois’s first capital in great detail, from its foundation in 1703 to its destruction by the Mississippi River in the latter part of the nineteenth century, as well as everything in between: successes, setbacks, and the lives of the people who inhabited the space.

At the outset the Kaskaskia tribe, along with Jesuit missionaries and French traders, settled near the confluence of the Kaskaskia and Mississippi rivers, about sixty miles south of modern-day St. Louis. The town quickly became the largest French town and most prosperous settlement in the Illinois Country. After French control ended, Kaskaskia suffered under corrupt British and then inept American rule. In the 1790s the town revived and became the territorial capital, and in 1818 it became the first state capital. Along the way Kaskaskia was beset by disasters: crop failures, earthquakes, tornadoes, floods, epidemics, and the loss of the capital-city title to Vandalia. Likewise, human activity and industry eroded the river’s banks, causing the river to change course and eventually wash away the settlement. All that remains of the state’s first capital today is a village several miles from the original site.

MacDonald and Waters focus on the town’s growth, struggles, prosperity, decline, and obliteration, providing an overview of its domestic architecture to reveal how its residents lived. Debunking the notion of a folklore tradition about a curse on the town, the authors instead trace those stories to late nineteenth-century journalistic inventions. The result is a vibrant, heavily illustrated, and highly readable history of Kaskaskia that sheds light on the entire early history of Illinois.
[more]