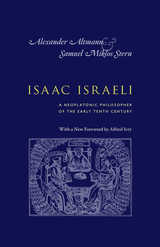 Recognized as one of the earliest Jewish neo-Platonist writers, Isaac ben Solomon Israeli (ca. 855–955) influenced Muslim, Jewish, and Christian scholars through the Middle Ages. A native of Egypt who wrote in Arabic, Israeli explored definitions of such terms as imagination, sense-perception, desire, love, creation, and “coming-to-be” in his writings.

This classic volume contains English translations of Israeli’s philosophical writings, including the Book of Definitions, the Book of Substances, and the Book on Spirit and Soul. Additionally, Isaac Israeli features a biographical sketch of the philosopher and extensive notes and comments on the texts, as well as a survey and appraisal of his philosophy. Restored to print for the first time in decades, Isaac Israeli will be essential reading for students and scholars of medieval philosophy and Jewish studies. 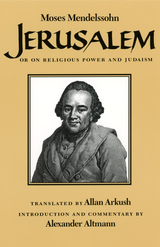 Jerusalem
Or on Religious Power and Judaism
Moses Mendelssohn
Brandeis University Press, 1983
A classic text of enduring significance, Moses Mendelssohn’s Jerusalem (1783) stands as a powerful plea for the separation of church and state and also as the first attempt to present Judaism as a religion eminently compatible with the ideas of the Enlightenment. Allan Arkush’s new translation, drawing upon the great strides made by Mendelssohn research in recent decades, does full justice to contemporary insights into the subject while authentically reflecting a distinguished eighteenth-century text. Alexander Altmann’s learned introduction opens up the complex structure and background of Mendelssohn’s ideas. His detailed commentary, keyed to the text, provides references to literary sources and interpretations of the philosopher’s intent.
[more]