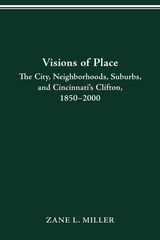 Almost every American city has or had neighborhoods like Clifton, which developed in the mid-nineteenth century as a silk-stocking suburb with a more diverse population than most observers noticed. Incorporated by Cincinnati in the late nineteenth century, Clifton had a reputation as a better-than-average place in which to live, a view that persisted until the end of the twentieth century.

In Visions of Place, Zane L. Miller treats ideas about the nature of cities—including their neighborhoods and their suburbs—as the dynamic factors in Clifton’s experience and examines the changes in Clifton's social, physical, civic, and political structure resulting from these transforming notions. These structural shifts involved a variety of familiar nineteenth- and twentieth-century urban phenomena, including not only the switch from suburban village to city neighborhood and the salience of interracial fears but also the rise of formal city planning and conflicts among Protestants, Catholics, and Jews over the future of Clifton's religious and ethnic ambiance.

Miller concludes with a policy analysis of current and future prospects for neighborhoods like Clifton and the cities and metropolitan areas of which they form a part.