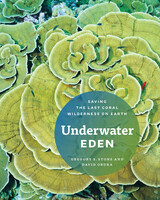 Underwater Eden
Saving the Last Coral Wilderness on Earth
Edited by Gregory S. Stone and David Obura
University of Chicago Press, 2012
“It was the first time I’d seen what the ocean may have looked like thousands of years ago.” That’s conservation scientist Gregory S. Stone talking about his initial dive among the corals and sea life surrounding the Phoenix Islands in the South Pacific. Worldwide, the oceans are suffering. Corals are dying off at an alarming rate, victims of ocean warming and acidification—and their loss threatens more than 25 percent of all fish species, who depend on the food and shelter found in coral habitats. Yet in the waters off the Phoenix Islands, the corals were healthy, the fish populations pristine and abundant—and Stone and his companion on the dive, coral expert David Obura, determined that they were going to try their best to keep it that way.
Underwater Eden tells the story of how they succeeded, against great odds, in making that dream come true, with the establishment in 2008 of the Phoenix Islands Protected Area (PIPA). It’s a story of cutting-edge science, fierce commitment, and innovative partnerships rooted in a determination to find common ground among conservationists, business interests, and governments—all backed up by hard-headed economic analysis.
Creating the world’s largest (and deepest) UNESCO World Heritage Site was by no means easy or straightforward. Underwater Eden takes us from the initial dive, through four major scientific expeditions and planning meetings over the course of a decade, to high-level negotiations with the government of Kiribati—a small island nation dependent on the revenue from the surrounding fisheries. How could the people of Kiribati, and the fishing industry its waters supported, be compensated for the substantial income they would be giving up in favor of posterity? And how could this previously little-known wilderness be transformed into one of the highest-profile international conservation priorities?
Step by step, conservation and its priorities won over the doubters, and Underwater Eden is the stunningly illustrated record of what was saved. Each chapter reveals—with eye-popping photographs—a different aspect of the science and conservation of the underwater and terrestrial life found in and around the Phoenix Islands’ coral reefs. Written by scientists, politicians, and journalists who have been involved in the conservation efforts since the beginning, the chapters brim with excitement, wonder, and confidence—tempered with realism and full of lessons that the success of PIPA offers for other ambitious conservation projects worldwide.
Simultaneously a valentine to the diversity, resilience, and importance of the oceans and a riveting account of how conservation really can succeed against the toughest obstacles, Underwater Eden is sure to enchant any ocean lover, whether ecotourist or armchair scuba diver.