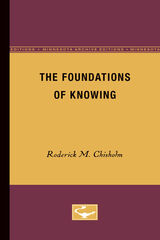 The Foundations of Knowing was first published in 1982. Minnesota Archive Editions uses digital technology to make long-unavailable books once again accessible, and are published unaltered from the original University of Minnesota Press editions.

This collection of essays on the foundations of empirical knowledge brings together ten of Roderick M. Chisholm's most important papers in epistemology, three of them published for the first time, the others significantly revised and expanded for this edition. The essays in Part I constitute a thoroughgoing defense of foundationalism—the doctrine that our justification for believing always rests upon a self-evident basis. In Part II, Chisholm applies foundationalist principles to various areas within the theory of knowledge, and in part III he presents a history of twentieth-century American epistemology.

"Roderick M. Chisholm's work has been most influential both in the development of epistemology and in the widespread application of his analytic method. I am sure this publication featuring the unification of his views will be of great value to those working on the central issues of philosophy." Hector-Neri Castañeda, Indiana University

Roderick Chisholm is Andrew W. Mellon Professor of the Humanities in the department of philosophy at Brown University. Among his books are Perceiving: A Philosophical Study, Theory of Knowledge, Person and Object,and The First Person (Minnesota, 1981).