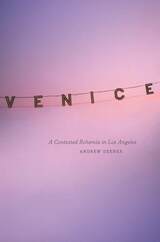 Venice
A Contested Bohemia in Los Angeles
Andrew Deener
University of Chicago Press, 2012
Nestled between Santa Monica and Marina del Rey, Venice is a Los Angeles community filled with apparent contradictions. There, people of various races and classes live side by side, a population of astounding diversity bound together by geographic proximity. From street to street, and from block to block, million dollar homes stand near housing projects and homeless encampments; and upscale boutiques are just a short walk from the (in)famous Venice Beach where artists and carnival performers practice their crafts opposite cafés and ragtag tourist shops. In Venice: A Contested Bohemia in Los Angeles, Andrew Deener invites the reader on an ethnographic tour of this legendary California beach community and the people who live there.
In writing this book, the ethnographer became an insider; Deener lived as a resident of Venice for close to six years. Here, he brings a scholarly eye to bear on the effects of gentrification, homelessness, segregation, and immigration on this community. Through stories from five different parts of Venice—Oakwood, Rose Avenue, the Boardwalk, the Canals, and Abbot Kinney Boulevard— Deener identifies why Venice maintained its diversity for so long and the social and political factors that threaten it. Drenched in the details of Venice’s transformation, the themes and explanations will resonate far beyond this one city.
Deener reveals that Venice is not a single locale, but a collection of neighborhoods, each with its own identity and conflicts—and he provides a cultural map infinitely more useful than one that merely shows streets and intersections. Deener's Venice appears on these pages fully fleshed out and populated with a stunning array of people. Though the character of any neighborhood is transient, Deener's work is indelible and this book will be studied for years to come by scholars across the social sciences.
[more]