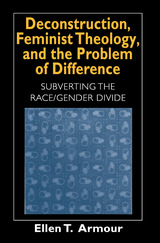 The term "feminism" conjures up the promise of resistance to the various forms of oppression women face. But feminism's ability to fulfill this promise has been undermined by its failure to deal adequately with the difference that race makes for gender. In this book, Ellen T. Armour forges an alliance between deconstruction and feminist theology and theory by demonstrating deconstruction's usefulness in addressing feminism's trouble with race.

Armour shows how the writings of Jacques Derrida and Luce Irigaray can be used to uncover feminism's white presumptions so that race and gender can be thought of differently. In clear, concise terms she explores the possibilities and limitations for feminist theology of Derrida's conception of "woman" and Irigaray's "multiple woman," as well as Derrida's thinking on race and Irigaray's work on religion. Armour then points a way beyond the race/gender divide with the help of African-American theorists such as bell hooks, Hortense Spillers, and Patricia Hill Collins.


Acknowledgments
Introduction
1. What "Woman"? The Problem of Race in Whitefeminist Theology and Theory
2. "Nothing Outside the Text"?
3. Deconstruction's Alliance with Feminism: Possibilities and Limits
4. Irigaray: Thinking Difference(s)
5. Derrida as Supplément: Deconstruction and Race on Philosophy's Terrain
6. Through the Looking Glass: Subverting the Race / Gender Divide
Notes
Works Cited
Name Index
Subject Index