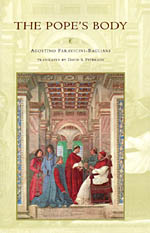 In contrast to the role traditionally fulfilled by secular rulers, the pope has been perceived as an individual person existing in a body subject to decay and death, yet at the same time a corporeal representation of Christ and the Church, eternity and salvation. Using an array of evidence from the eleventh through the fifteenth centuries, Agostino Paravicini- Bagliani addresses this paradox. He studies the rituals, metaphors, and images of the pope's body as they developed over time and shows how they resulted in the expectation that the pope's body be simultaneously physical and metaphorical. Also included is a particular emphasis on the thirteenth century when, during the pontificate of Boniface VIII (1294-1303), the papal court became the focus of medicine and the natural sciences as physicians devised ways to protect the pope's health and prolong his life.

Masterfully translated from the Italian, this engaging history of the pope's body provides a new perspective for readers to understand the papacy, both historically and in our own time.
TABLE OF CONTENTS