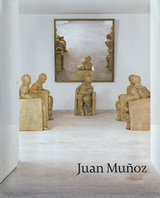 Juan Munoz
by Neal Benezra and Olga M. Viso
University of Chicago Press, 2001
Cloth: 978-0-226-04290-9
One of the leading artists of his generation, the Spanish sculptor Juan Muñoz (1953-2001) was known for his diverse and highly original body of work centering on the narrative possibilities of figures in environments. Juan Muñoz illustrates in full color approximately sixty works—including sculptures, drawings, and several major installations—which will be included in a major exhibition presented by the Hirshhorn Museum and Sculpture Garden and the Art Institute of Chicago in October 2001.

Muñoz's early work focused on architectural objects that implied a transitory human presence. Then, defying the trend among progressive artists, he began to introduce figures into his work. Casting his figures in papier-mâché, resin, and eventually bronze, Muñoz limited their size and descriptive details to heighten their psychological impact. In the 1990s, Muñoz created his signature "conversation pieces," large ensembles of figures installed in indoor or outdoor settings. Calling upon a wide range of sources in literature, music, film, as well as painting and sculpture, Muñoz's work explores the nature of psychological interaction and engages the viewer on a variety of perceptual levels.

Juan Muñoz includes essays by Neal Benezra, art critic Michael Brenson, and Olga Viso, as well as an interview with the artist by Paul Shimmel. Also featuring highlights from a 2001 installation commissioned by London's Tate Modern, Juan Muñoz is the most comprehensive overview of this challenging and exciting artist's work.

AUTHOR BIOGRAPHY
Neal Benezra is the deputy director and curator of modern and comtemporary art at the Art Institute of Chicago.
TABLE OF CONTENTS