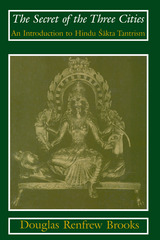 The esoteric Hindu traditions of Tantrism have profoundly influenced the development of Indian thought and civilization. Emerging from elements of yoga and wisdom traditions, shamanism, alchemy, eroticism, and folklore, Tantrism began to affect brahmanical Hinduism in the ninth century. Nevertheless, Tantrism and its key historical figures have been ignored by scholars. This accessible work introduces the concepts and practices of Hindu Sakta Tantrism to all those interested in Hinduism and the comparative study of religion.
TABLE OF CONTENTS


Preface
Acknowledgments
Part One - Hindu Sakta Tantrism
Introduction
1. Locating the Text and Tradition
Locating the Tripura Upanisad: Veda or Tantra?
Vaidika Tantrics and Non-Tantric Vaidikas: Making a Distinction and Affirming Hindu Identity
Locating Tripura Upanisad: Its Historical and Theological Roles
Tripura Upanisad: The Commentaries of Bhaskararaya and Other Sakta Tantrics
2. Studying the Text: Translating, Studying, and Interpreting Scripture
3. Reading the Text
Introducing Sakta Tantrism through a Scripture
The Srividya School: Defining and Classifying Saktism and Tantrism
Sakta Tantrism as Hindu Tantrism Par Excellence
The Basic Structure and Content of Tripura Upanisad
A Brief Review of Internal Structure and a Verse Summary
The Thematic Study of Hindu Tantrism and Srividya
Qualification, Initiation, and the Guru
Srividya and Tantric Theology
Srividya and Tantric Practice
Ananda: Tantric Sadhana and Tantric Goals
The srividya: Mantra as Power
Summarizing Tantric Theology and Practice
4. Conclusion: Present and Future Tantric Studies
Part Two: The Secret of the Three Cities
Introduction
The Great Upanisad of Tripura
Appendix: The Cakras of the Body and the Sricakra
List of Abbreviations
Notes
Glossary
Selected Bibliography
Index