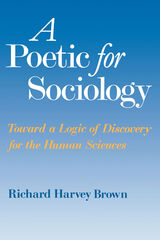 A Poetic for Sociology: Toward a Logic of Discovery for the Human Sciences
by Richard Harvey Brown
University of Chicago Press, 1989
Paper: 978-0-226-07619-5
For too long, argues Richard Harvey Brown, social scientists have felt forced to choose between imitating science's empirical methodology and impersonating a romantic notion of art, the methods of which are seen as primarily a matter of intuition, interpretation, and opinion. Developing the idea of a "cognitive aesthetic," Brown shows how both science and art—as well as the human studies that stand between them—depend on metaphoric thinking as their "logic of discovery" and may be assessed in terms of such aesthetic criteria of adequacy as economy, elegance, originality, scope, congruence, and form.

By recognizing this "aesthetic" common ground between science and art, Brown demonstrates that a fusion can be achieved within the human sciences of these two principal ideals of knowledge—the scientific or positivist one and the artistic or intuitive one. A path, then, is opened for creating a knowledge of ourselves and society which is at once objective and subjective, at once valid scientifically and significantly humane.
AUTHOR BIOGRAPHY
Richard Harvey Brown is associate professor of sociology at the University of Maryland and the author of Structure, Consciousness, and History and Society as Text, the latter published by the University of Chicago Press.
TABLE OF CONTENTS


Preface
Acknowledgements
1. Poetics and sociology: an invitation
Assumptions and methods of approach
Contemporary sociology: a budget of crises
The central problematic
2. Cognitive aesthetics: symbolic realism and perspectival knowledge
Positive science against romantic art
Philosophic background to symbolic realism
Toward a cognitive aesthetics
Form and content
"Subjective" symbols versus "objective" science
3. Points of view
Point of view
Sociological distance
Point of view as a resource
Point of view as an instrument of self-reflection
4. Metaphor
The cognitive status of metaphors
Metaphor in art, science, and social theory
Objections of our scientific critics
Criteria of adequacy for metaphors in sociology
Illustrative metaphor
Metaphor as model
The root metaphors of sociological thought
5. Irony
Of irony
Irony in sociology theory
Goffman and Sorokin: two styles in ironic social thought
Ironism as a humanism
Irony as a logic of discovery
6. Coda
Concluding argument
On theory and practice
Notes
Bibliography
Index