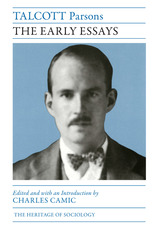 With the publication in 1937 of his first book, The Structure of Social Action, Talcott Parsons (1902-79) established himself as one of America's most important social theorists. Yet Parsons's essays from the decade preceding 1937 are virtually unknown to theorists and historians of sociology. By gathering the majority of Parsons's articles and book reviews published between 1923 and 1937, Charles Camic supplies the first comprehensive selection of the writings of the "early Parsons."

In his superb introductory essay, Camic situates Parsons's early writings in their sociointellectual and biographical context. Drawing upon extensive historical research, he identifies three overlapping but relatively distinct thematic phases in the early development of Paron's ideas: that on capitalist society and its origins, that one the historical development of the theory of action, and that on the foundations of analytical sociology. Camic correlates the emergence of these phases to Parsons's experiences at Amherst College in the early 1920s, in London and Heidelberg during the mid-1920s, and at Harvard University in the important period from the late 1920s to the mid-1930s. Reproducing in full each of twenty-one selections, this volume charts the changes and continues in the early development of some of Parsons's most fundamental ideas.
AUTHOR BIOGRAPHY
Charles Camic is professor of sociology at the University of Wisconsin, Madison. He is the author of Experience and Enlightenment: Socialization for Cultural Change in Eighteenth-Century Scotland, also published by the University of Chicago Press.
TABLE OF CONTENTS


Acknowledgments
Introduction: Talcott Parsons before The Structure of Social Action, by Charles Camic
I. Capitalist Society and Its Origins
1. "Capitalism" in Recent German Literature: Sombart and Weber
2. Review of Modern Capitalism: Its Origins and Development, by Henri Sée
3. Jean Calvin
4. Samuel Smiles
5. Service
6. Thrift
7. H. M. Robertson on Max Weber and His School
II. Studies in the Development of the Theory of Action
8. Economics and Sociology: Marshall in Relation to the Thought of His Time
9. Review of An Introduction to the Study of Society, by Frank H. Hankins
10. Review of Einführung in die Soziologie, by Ferdinand Tönnies
11. Thomas Robert Malthus
12. Vilfredo Pareto
13. Society
14. Review of Max Webers Wissenschaftslehre, by Alexander von Schelting
15. Pareto's Central Analytical Scheme
III. The Foundations of Analytical Sociology
16. Some Reflections on "The Nature and Significance of Economics"
17. Sociological Elements in Economic Thought
18. The Place of Ultimate Values in Sociological Theory
19. On Certain Sociological Elements in Professor Taussig's Thought
20. Review of Economics and Sociology, by Adolf Löwe
Appendix: A Word from Amherst Students (with Addison T. Cutler)
Index