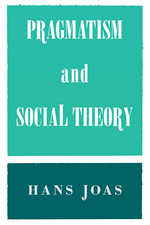 Rising concerns among scholars about the intellectual and cultural foundations of democracy have led to a revival of interest in the American philosophical tradition of pragmatism. In this book, Hans Joas shows how pragmatism can link divergent intellectual efforts to understand the social contexts of human knowledge, individual freedom, and democratic culture.

Along with pragmatism's impact on American sociology and social research from 1895 to the 1940s, Joas traces its reception by French and German traditions during this century. He explores the influences of pragmatism—often misunderstood—on Emile Durkheim's sociology of knowledge, and on German thought, with particularly enlightening references to its appropriation by Nazism and its rejection by neo-Marxism. He also explores new currents of social theory in the work of Habermas, Castoriadis, Giddens, and Alexander, fashioning a bridge between Continental thought, American philosophy, and contemporary sociology; he shows how the misapprehension and neglect of pragmatism has led to systematic deficiencies in contemporary social theory.

From this skillful historical and theoretical analysis, Joas creates a powerful case for the enduring legacy of Peirce, James, Dewey, and Mead for social theorists today.
AUTHOR BIOGRAPHY
Hans Joas is professor of sociology at the Free University of Berlin.
TABLE OF CONTENTS


Acknowledgments
Introduction: Steps toward a Pragmatist Theory of Action
1. Pragmatism in American Sociology
Pragmatism and Classical European Social Theory
2. Durkheim and Pragmatism: The Psychology of Consciousness and the Social Constitution of Categories
3. An Underestimated Alternative: America and the Limits of "Critical Theory"
4. American Pragmatism and German Thought: A History of Misunderstandings
Pragmatism and Contemporary Social Theory
5. The Unhappy Marriage of Hermeneutics and Functionalism: Jurgen Habermas's Theory of Communicative Action
6. Institutionalization as a Creative Process: The Sociological Importance of Cornelius Castoriadis's Political Philosophy
7. A Sociological Transformation of the Philosophy of Praxis: Anthony Giddens's Theory of Structuration
8. The Antinomies of Neofunctionalism: A Critical Essay on Jeffrey Alexander
9. Role Theories and Socialization Research
Conclusion: The Creativity of Action and the Intersubjectivity of Reason—Mead's Pragmatism and Social Theory
Index