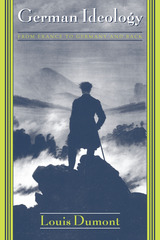 In this comparative anthropological analysis, Louis Dumont illuminates German and French ideology, European culture, and cultural interaction. His analysis of texts by Troeltsch, Thomas Mann, Goethe, and others, against the background of previously gathered evidence and of French common notions, specify the differences—otherwise frequently but vaguely alluded to—between French and German cultures.

Anyone interested in the fate of national ideology and the concept of the individual will benefit from this radical reinterpretation of modern values and the place of modernity in history.

"What François Furet did for French history, Dumont did for anthropology, turning it away from engaged politics and towards the sober study of the modern age." —Mark Lilla, London Review of Books

"There are many fine things in Dumont's study. Beyond any doubt, his cultural anthropology of the modern spirit highlights some of the key energies of the of the last two centuries. . . . [An] impressive . . . detailed analysis." —Martin Swales, Times Higher Education Supplement


Preface to the English Edition
I: Collective Identity
1: Introduction: Collective Identities and Universalist Ideology -the Actual Interplay
2: German Ideology: Cultural Identity in Interaction
II: Bildung around 1914
3: The German Idea of Liberty According to Troeltsch
4: "Unpolitical" Individualism: German Culture in Thomas Mann's Reflections
III: The Dawn of Bildung
5: From Pietism to Aesthetics: Totality and Hierarchy in the Aesthetics of Karl Philipp Moritz
6: Wilhelm von Humboldt, or Bildung Alive
7: Bildung Represented: The Years of Apprenticeship of Wilhelm Meister
IV: Back to France
8: French Political Ideology Seen in the Light of an Incipient Comparison of National Cultures
Works Cited
Index