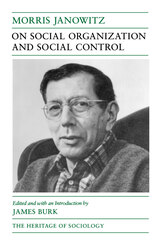 In the four decades following the end of World War II, Morris Janowitz (1919-88) published major works in macrosociology, urban and political sociology, race and ethnic relations, and the study of armed forces and society. His research was deeply rooted in the traditions of philosophical pragmatism and the Chicago school of sociology, influences which led him to reject grand theories and mechanistic explanations of social life. Yet he remained confident in the capacity of sociological reason to come to grips with central aspects of the human condition. On the basis of his studies, Janowitz came to believe that the transition from early to advanced industrial society radically altered institutional organization to make democratic social control more difficult, though not impossible, to achieve. The task of his "pragmatic sociology" was to identify fundamental trends in the social organization of industrial societies, to indicate their substantive implications for social control, and to clarify realistic alternatives for institution building which would strengthen the prospects for maintaining liberal democratic regimes.

In this volume, James Burk selects from Janowitz's scholarly writings to provide a comprehensive overview of his wide-ranging interests. Organized to demonstrate the common logic of inquiry and substantive unity of Janowitz's contribution to several subfields of sociology, the collection includes analyses of the concept of social control, ethnic intolerance and hostility, citizenship in Western societies, models for urban education, and the professionalization of military elites. Burk provides a richly detailed, critical account of Janowitz's intellectual development, placing his writings in historical context and showing their continuing relevance for sociological research. Useful to both students and specialists, the volume is an important source for the ideas and methods of one of sociology's leading figures.
AUTHOR BIOGRAPHY
Morris Janowitz taught sociology at the University of Chicago for twenty-six years. His numerous publications include Social Control of the Welfare State and The Last Half-Century: Societal Change and Politics in America, both published by the University of Chicago Press. He founded the Heritage of Sociology series and served as editor for twenty years. James Burk is associate professor of sociology at Texas A&M University.
TABLE OF CONTENTS


Acknowledgments
Introduction: A Pragmatic Sociology, by James Burk
I. The Logic of Sociological Inquiry
1. Styles of Theory Construction
2. The Concept of Social Control
3. Theory and Policy: Engineering versus Enlightenment Models
II. Social Organization: Institutional Development in Advanced Industrial Society
4. Professionalization of Military Elites
5. The Social Dimensions of the Local Community
6. Inequality, Occupations, and Welfare
7. The Emergence of Weak Political Regimes
III. Primary Groups and Personal Control
8. Social Personality and Personal Control
9. Cohesion and Disintegration in the Wehrmacht in World War II
10. Ethnic Intolerance and Hostility
11. The Psychological Context of Welfare
IV. Social Control: Citizenship and Democratic Polity
12. Observations on the Sociology of Citizenship: Obligations and Rights
13. Military Institutions and Citizenship in Western Societies
14. Mass Media and Popular Distrust
15. The Social Ecology of Citizenship
V. Institution Building and Social Change
16. The Ideology of Professional Psychologists
17. Models for Urban Education
18. Institution Building for Military Stabilization
19. Toward the Reconstruction of Patriotism
Index