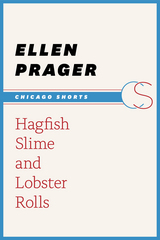 BUY FROM
Hagfish Slime and Lobster Rolls
by Ellen Prager
University of Chicago Press, 2011
eISBN: 978-0-226-09457-1
When viewed from a quiet beach, the ocean, with its rolling waves and vast expanse, can seem calm, even serene. But hidden beneath the sea’s waves are a staggering abundance and variety of active creatures, engaged in the never-ending struggles of life—to reproduce, to eat, and to avoid being eaten. With Hagfish Slime and Lobster Rolls, marine scientist Ellen Prager takes us deep into the sea to introduce an astonishing cast of fascinating and bizarre creatures that make the salty depths their home, with the help of stunning color photos. From the lobsters that battle rivals or seduce mates with their urine to hagfish that ties itself into a knot to keep from suffocating in its own slime—there’s far more to Prager’s account than her ever-entertaining anecdotes. Again and again, she illustrates the crucial connections between life in the ocean and humankind, enchanting us as she educates, enthralling us with the wealth of life in the sea, and reminding us of our need to protect it.