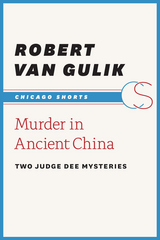 BUY FROM
Murder in Ancient China: Two Judge Dee Mysteries
by Robert van Gulik
University of Chicago Press, 2013
eISBN: 978-0-226-14688-1
Judge Dee—Confucian Imperial magistrate, inquisitor, and public avenger, based on a famous statesman—was Dutch diplomat and Chinese cultural historian Robert van Gulik’s (1910–67) lasting invention. A welcome addition to the elite canon of fictional detectives, the Judge steps in to investigate homicide, theft, and treason and restores order to the golden age of the Tang Dynasty. In Murder in Ancient China’s first story, we watch as Judge Dee attempts to solve the mystery of an elderly poet murdered by moonlight in his garden pavilion; in the second, set on the eve of the Chinese New Year, the Judge makes two rare mistakes—will peril result?
REQUEST ACCESSIBLE FILE