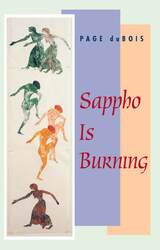 To know all we know about Sappho is to know little. Her poetry, dating from the seventh century B.C.E., comes to us in fragments, her biography as speculation. How is it then, Page duBois asks, that this poet has come to signify so much? Sappho Is Burning offers a new reading of this archaic lesbian poet that acknowledges the poet's distance and difference from us and stresses Sappho's inassimilability into our narratives about the Greeks, literary history, philosophy, the history of sexuality, the psychoanalytic subject.

In Sappho is Burning, duBois reads Sappho as a disruptive figure at the very origin of our story of Western civilization. Sappho is beyond contemporary categories, inhabiting a space outside of reductively linear accounts of our common history. She is a woman, but also an aristocrat, a Greek, but one turned toward Asia, a poet who writes as a philosopher before philosophy, a writer who speaks of sexuality that can be identified neither with Michel Foucault's account of Greek sexuality, nor with many versions of contemporary lesbian sexuality. She is named as the tenth muse, yet the nine books of her poetry survive only in fragments. She disorients, troubles, undoes many certitudes in the history of poetry, the history of philosophy, the history of sexuality. DuBois argues that we need to read Sappho again.
TABLE OF CONTENTS


Preface and Acknowledgments
1: Fragmentary Introduction
2: The Aesthetics of the Fragment
3: Sappho's Body-in-Pieces
4: Sappho in the Text of Plato
5: Helen
6: Sappho in the History of Sexuality
7: Michel Foucault, Sappho, and the Postmodern Subject
8: Asianism and the Theft of Enjoyment
Select Bibliography
Index