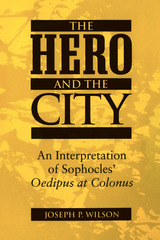 Without resorting to the jargon often employed by contemporary critics, this book covers all major aspects and questions raised by the play. The text contains a thorough examination of the contrast between Athens and its dramatic opposite, Thebes, a contrast best represented by the comparison between each city's primary representative, Theseus or Creon. Wilson offers a radical rereading of the Oedipus riddle and concludes with a substantial discussion of the play's (and playwright's) role in providing a political and moral education for the troubled Athenian polis in the last decade of the tumultuous fifth century.
Joseph P. Wilson is Associate Professor in the Department of Foreign Languages and Literatures at the University of Scranton.
REQUEST ACCESSIBLE FILE